Frontbencher Anna Soubry has called for a smoking ban in cars to protect children who are being subjected to second hand smoke. Apparently a good 300,000 children have to visit the GP every year in the UK thanks to second hand smoke, and the fumes inhaled as a passenger in the car of a smoker might be up to 11 times more potent than regular second hand smoke thanks to the confined space it occupies.

Apparently there notion has been met with approval with the anti-smoking charity Ash saying there is ‘growing public support for a ban on smoking in cars altogether.’ It makes sense , you wouldn’t hook up the car exhaust and let your children breath those fumes in so why do it with cigarette fumes? The only problem is that there doesn’t seem to be any real reason why those who don’t have passengers in the car shouldn’t smoke.

In an msn article the author deemed the idea as pointless, claiming that  ‘without more police out there policing the roads, it’s hard to see how a ban on smoking in a car with children present would have any more impact than the ban on using handheld mobile phones.’ The author has a point and it is a reality that there would still be many who smoke in the car regardless of the law, but I do think the author underestimates how many people the law would deter; sure people still use their mobile phones whilst driving, but imagine how many more people would use their phones whilst driving if the law wasn’t in place. 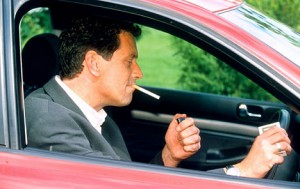 In my opinion there are plenty of benefits with banning smoking in cars, for one my Fiat Punto will no longer stink of an ashtray, I have also known people be put off buying used cars because the original owner was a smoker.